I’m an easygoing sort. Cold beer and fun waves are all I really need to get by. So imagine my delight when a package arrives in The Inertia office with a few cans of beer. Free, no less. I was psyched. Turns out the Surfrider Foundation recently collaborated with Coronado Brewing Co. on their CoastWise Session IPA – which, as a self-proclaimed beer snob, I opine is pretty damn good. 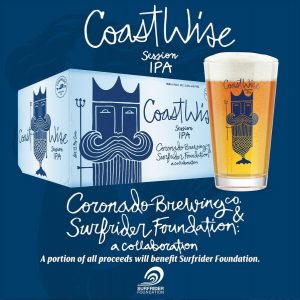 A portion of the proceeds from this beer goes to the Surfrider Foundation – a win-win for the discerning beer drinker-slash-coastal protector. In a press release, Coronado and Surfrider explained the impetus for the partnership. The art on the CoastWise can is an illustration of Poseidon, a nod to Coronado’s mermaid roots.

“As a local brewery with coastal roots, we’re thrilled to partner with the Surfrider Foundation to help support the protection of our ocean and shorelines,” said Brandon Richards, COO, Coronado Brewing Company. “Since founding Coronado Brewing Company 21 years ago on Coronado Island, we’ve been continually inspired by the ocean lifestyle, and we felt this was a natural partnership that gives consumers an opportunity to directly support the protection of the coasts through the CoastWise collaboration.”

Ok, so here are a few things you should know about the beer itself. CoastWise is brewed with a mix of Mosaic and Sorachi Ace (those are hops varieties for the uninitiated), “giving the beer bright tropical and citrus notes, with a lingering, dry bitterness.” It’s a “Session IPA,” which means it’s brewed with lower ABV content than a typical IPA – in this case, 5%. Take it from a beer snob, CoastWise is tasty.

This article originally appeared in The Inertia.