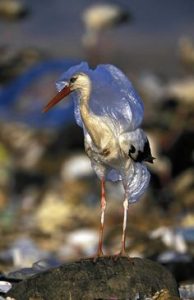 The world faces an indisputable plastic pollution crisis. More than 99% of plastic is created from chemicals made from a cheap oversupply of fracked gas, which is fueling a global boom in new plastic production. That plastic is causing serious environmental problems at every step of its life cycle.

Our current consumer culture has been driven by out of control by multinational fossil fuel and petrochemical corporations that have designed and perpetuated a market system that is destroying our communities and the planet; a system of environmental racism and injustice that for generations has hit low-income families and communities of color first and hardest.

Plastic production fuels the climate crisis with increased greenhouse gas emissions and damages local communities where plastic is made with toxic air and water pollution. Plastic is also a threat to human health: As we increasingly consume more and more of our food and drinks from single-use plastic wrappers and containers, we’re exposed to chemicals linked to many of the known public health crises of our time, including obesity, ADD/ADHD and many forms of cancer.

Once discarded, plastic clogs our rivers and oceans, harms wildlife, infiltrates our drinking water, and persists in the environment for centuries. Half of all plastics ever manufactured have been made in the last 15 years, and annual plastic pollution into rivers, lakes and oceans could surpass 50 million tons within the next 10 years unless significant policy changes are made. Banning bags and straws are important first steps taken by state and local governments, but we need bold new federal policies to address the plastic pollution crisis.

And despite false and misleading claims by the makers of plastics, we cannot recycle our way out of this problem. According to the United States Environmental Protection Agency, U.S. plastic recycling rate is an anemic 8%. Instead more than 90% of plastics in the United States is buried, burned or released into the environment.

The solution to plastic pollution is simple: Reduce the amount of unnecessary plastic produced.

We can transform this extractive, throwaway economy to a regenerative, inclusive one that’s good for our economy and creates American jobs. We need to stop plastic contamination at its source before it enters the marketplace, while improving our waste-management systems, developing new business models, phasing out the worst plastic offenders, and shifting to reusable non-plastic alternatives.

Surfrider LA is a founding member of the Reusable LA coalition that is working to advance upstream policies that shift our throwaway culture to one of reuse and refill economy. You can learn more and get involved here.