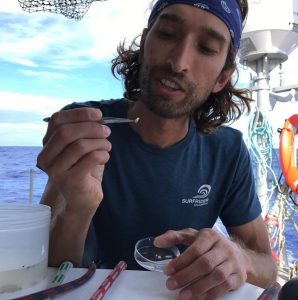 My name is Michael Doshi, in the plastic pollution world I am known as the Gnarly Beach Cleaner. I spread awareness of plastic pollution via social media through fun and positivity! I volunteer with the Surfrider Foundation West LA / Malibu, 5 Gyres, Heal the Bay, and Algalita Marine Reasearch and Education.

I recently returned from an expedition to the South Pacific Gyre (Garbage Patch) with Algalita and the legendary Captain Charles Moore. Along with Captain Moore and a crew of four other activists, we sailed the high seas between Rapa Nui and Chile to conduct plastic pollution sampling as well as map and find the vortex of the Garbage Patch.

We were the first six people to map the South Pacific Gyre to the extent that we did and we had lots of fun while doing it! As if we were on a plastic safari, days were spent hunting down large pieces of marco-plastic as well as searching for the high pressure micro-plastic pollution accumulation zones. Like plastic pollution pirates in uncharted waters, we plundered the South Pacific in the name of science, taking aboard the ship whatever plastic we could find! 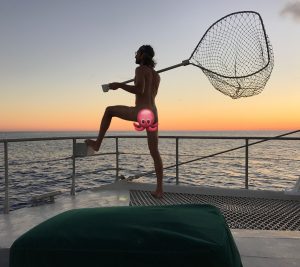 I hope to see you at the Surfrider Chapter meeting on April 26th as I will be sharing some photos, videos, and stories from the expedition. You will be presented with a brief education on plastic pollution and hear what the crew witnessed happening in the growing South Pacific Garbage Patch! I hope to give you knowledge and empowerment to spread awareness of plastic pollution issues and remind you to have fun while doing so!